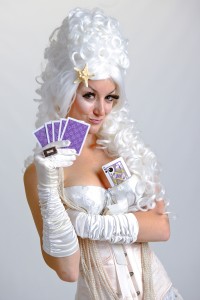 Pearl as the Queen of Pearls

Producer and experience designer “PartyGirl” Pearl has been throwing theme parties for as long as she can remember. The name Pearl was given to her on the playa at Burning Man in 2011 (the same year as the dubstep invasion) and she carried it into the default world when she began taking burlesque classes with Bombshell Betty and Red Hots Burlesque. The Party Girl moniker is a nod to the “party girl” stereotype, but once you are hooked by the alliteration Pearl will take you much deeper into her ocean. Pearl believes that burlesque and all other art forms (writing, fine art, music, and performance art alike) work best when they tell a story or raise a question. Pearl enjoys breaking out her spoken word pieces at parties on subjects like FreeTheNipple and “Why do I party?”. In producing Bass Cabaret, she carries this respect for storytelling through every phase of planning the show from theme selection, performance bookings, set design, and character development.

How the Pearl was Discovered

Before Party Girl Pearl, there was a young woman named Amy living in Philadelphia, PA. She had been to many music events on the East Coast and a few smaller festivals. She was inspired one year to start looking at some photos from Burning Man that her friend Rachman had posted and realized there was something bigger happening that she needed to be a part of. The art, of course, was inspiring, but it was in reading the captions and stories behind them, and later hearing these stories firsthand during her first encounter with “Burners” in California, that truly convinced her to go.

As the summer drew closer, she and Rachman made plans to drive from their home state of New Jersey out to Black Rock City, NV. He bought her a ticket for her birthday in July and, in August, picked her up in a Toyota Corolla to set off for their week-long road trip across the country.

Rachman had told her nothing about what to pack.

She had brought tank tops, flip flops, and other gear that would be appropriate for a late August in New Jersey. When she arrived at his friend’s house in Reno, she was handed the Survival Guide by a beautiful soul and read it cover to cover. Realizing that she was very unprepared, she made a long stop at Walmart to buy a sweatshirt and some other essentials, DSW for some boots, and the Melting Pot for some last-minute costumes. She defaulted to buying what could be described as “rave wear” and things she’d seen other people wearing in pictures. Rachman told her not to worry too much about costumes, but she didn’t want to seem like the first-timer that she was.

Finally packed and ready to go, the two set off for the long road into the festival.

The theme at Burning Man that year was Rights of Passage and the camp named itself Menarche, which is the Greek word for a woman’s first menstrual cycle in her life. After a long trek in, they found their camp, which had built a huge, vagina-shaped bar covered with splatters of red paint to look like blood.  Oh, and there was a stripper pole lodged directly in the middle of the clitoris, and campmates that happened to be excellent pole acrobats and dancers.  The camp served Bloody Marys every morning and in fact, for most of the day. These were the real Bloody Marys with Worcestershire sauce, celery, and even bacon. It was the best thing on the block and even being located somewhere around 8:30 and G, the bar was often filled with campmates and neighbors.

One afternoon, a woman stopped by the bar wearing a flapper headband, a strand of pearls, and not much else.

Amy had always loved the 1920s, inspired by a family photo of her “babci,” or Polish great-grandma, on her wedding day in the 20s wearing a short, boxy dress and a long veil over her bobbed hair. When she was older, she read all about the flappers and their feminist revolution — how they defied social norms by putting on makeup in public and hanging out with men at bars. Flappers were the bee’s knees! Yet at that point, it would never have occurred to Amy to dress like one in the middle of the desert.

Trying not to creep on the topless woman, Amy decided she had to say something.

“I was just noticing your outfit. I love flappers. Next year I will bring something like that, it’s really how I want…”

“You’re Pearl,” the woman interrupted, as if they had met before.

“Yes… I am Pearl,” Pearl thought, and it was an exhilarating thought. This was more significant than a nickname — it was as if a real and true part of herself had been cracked open like an oyster shell. It was time for Pearl to come out of her shell!

Pearl and the woman shared a warm embrace. Before long the woman disappeared back into the playa, sipping her Bloody Mary, and if she ever came back to the bar Pearl never saw her again.

After sharing this experience with Rachman, he agreed that Pearl was a fitting name. The rule of thumb for a playa name is that three people have to agree with the name for it to stick. It passed unanimously.

From then on, Amy introduced herself as Pearl on the playa, and before long it followed her to San Francisco as well.

As a young party planner, Pearl’s annual Halloween parties were the talk of the town featuring creepy food like “lady fingers” decorated to look like they had fingernails on them, and peeled grapes that looked and felt like eyeballs. Guests played relay races and silly group games, and they played classic Halloween theme music like Monster Mash and Purple People Eater. 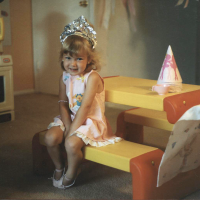 Her birthday parties were also themed — one year she and her mom planned a “backwards birthday” where they wrote the invitations backwards, set the clocks back, and made a pineapple upside-down cake. Guests turned their clothes backwards, and even walked backwards during the party.

In college, Pearl was part of a sorority and many academic clubs where she planned recruitment events, charity drives, field trips, corporate summits, and more.

Pearl’s goal is to redefine what’s possible in partying. She encourages you to come out to the next event and introduce yourself, and tell her about your experience partying with a purpose.

Why do we party?
Do we party to:
Connect / resurrect our long-forgotten friendships?
Redirect / our carnal energy?
Disconnect / let our bodies go, freely & entirely?
Or, to inspire / to co-create a world that we desire?
Why do we party?
Maybe, it’s all of the above.